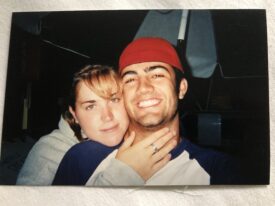 The year is 2001. George W. Bush is in his first year of office, the human genome has been sequenced for the first time, and Justin Timberlake and Britney Spears have just worn the bravest ever couples outfit to the American Music Awards: all denim. More importantly, 2001 marks the beginning of what became an amazing Camp Jewell adventure for Rob and Jen Dietrich. Rob at the coaxing of friend and Camp Jewell Alum, Erik Burmeister, makes the trip to Colebrook from California. Jen, searching for a job outside of hometown Erie, PA, goes to Google (or Yahoo or AskJeeves, it is 2001 after all) to hunt for camp opportunities and stumbles on Jewell. What follows is something all too familiar to the Camp Jewell community; a lifelong obsession.
The memories Rob and Jen have from that time are too many to count.

On days off, they would drive around CT and MA, hunting for parks and waterfalls where they could bask in moments of respite away from their camp responsibilities. At camp, Rob remembers fondly the days of singing and yelling with his campers, especially at Nancy Tucker concerts. “I would get on stage each session and sing the same songs with her,” Rob recalls, “It’s great to see her continue to be such a big part of Jewell each year.” For Jen, one of her most prescient memories brings her back to a moment she was forced to adapt. A self-proclaimed “not super outdoorsy” type, Jen’s co-counselor was away on the day where cabins signed up for overnight campsites. Having missed out on all the sites close to Main Camp, Jen was was left with no choice but to bring her 8 year old Bandits all the way over to the Back-40. To make the long trek quicker and fun, Jen’s village director loaded up the kids in the old pontoon boat, which was great until the motor died in the middle of Triangle Lake. With the sun setting, tents still to pitch, fires still to start and food still to cook, Jen did her best impression of a Venetian gondola pilot and pushed the boat the rest of the way with a pole.

Hooked after that first summer, both to camp and to each other, Rob and Jen would come back for two more summers in ‘02 and ‘03. During those years, they would go on to make lifelong friends with fellow counselors, but also with campers whom they keep in touch with to this day.

August 2003 hardly represented the end of their Camp Jewell journey, though. In 2019 their son Rory came for his first session at Camp Jewell. “The connection is still so strong, and we wanted our kids to experience at least one summer at Jewell.” Rory is now firmly on the Camp Jewell bandwagon as he plans to come back again next summer, this time with more friends and his brother Ian. “As parents, Camp Jewell has become a way of life,” says Jen. Many meals at home begin now with a Camp Jewell grace, evenings end with devotions and camp games replace moments of boredom. Friends from their days at camp have kids of their own now, turning check-in day into an impromptu Jewell reunion. Away from Jewell, their work with campers helped inspire them to go on several mission trips over an 8-year span in the aid of children and to participate in the foster system as foster parents.

Each person that has had the privilege of being a counselor at camp will tell you how valuable the camp experience is for kids. However, alumni know just how critical their summers on staff were to their own development as adults. Having come to camp not knowing a soul, Rob and Jen see now how those summers allowed them to ask “Who am I really?” without the pressure of outside relationships. “We gave a lot to those campers, but we gained so much more than we ever could give,” they say. “So much personal growth comes from living simply and being role models for kids.” When asked what jobs they’d take if they could work at camp again, the details are not too important. The most important part would be having the chance to impart their knowledge on staff to make it their best summer ever. That, and weekends off for more respite and waterfalls together.