WHO DO YOUR ANNUAL CAMPAIGN FUNDS HELP?

WHO DO YOUR ANNUAL CAMPAIGN FUNDS HELP?

I have a friend that I grew up with that came to Camp Jewell. She raved about her summer camp experiences at Jewell
and I always remember wishing I had that experience as a child. I remember her talking about her days and the
activities that she would do and I always thought it was so much cooler and better than what I was doing back at
home for the summer-and it really was! So when I finally grew up (if you can even say that?!) and I was able to have a
child of my own and summer came around, I remembered my friend again and her summer experience. In 2013 I asked
my son if he would want to do the same and he said yes in a heartbeat, and that was the beginning of his summer
experience at Jewell.
My son is 12 years old and an only child who has always been very independent. I don’t know if that is a feature of
being an only child but at Jewell I find he really shines because of his independence and being able to help other kids
that might not have that full capability of being independent yet. He’s a caring kid, too. Sure, he has his moments
when he acts up, but he’s got a good heart and really does reach out to kids that are struggling and he tries to include
everyone. I think only children do that because they are often the only ones around and have to find a way to make it
in large groups/be included. They know how it feels to want to be included. So when someone isn’t included, they feel
that and reach out to those kids. That’s how my son is with others.
I’ve seen a lot of changes in my son since he started going to Camp Jewell. He wants to do more things by himself and
on his own, even simple tasks like making dinner for the family. That’s a fabulous trait to see. You want your child to
grow up knowing how to cook and provide for himself and others. So the fact that he wanted to cook and make a
meal for the family was awesome! It didn’t have to be anything fancy but it was the effort that he took to do
that. When he came back from his first summer at camp he was a little more confident and ready for anything. It was
great to see such a positive and relaxed attitude in him. He’s always been a very chill kid, but you could just tell he all
-around liked being away from his family, knowing that he could function day to day without me and without his
stepdad giving all those gentle reminders. That’s a great thing for a kid to know and do. These days, we as parents
have almost become too hyper-focused on our child’s day to day lives that we forget to let them live and learn on their
own. Camp allows them to do that without parents watching over them as hawks. And it gives us as parents a
reminder that our kids can be young adults without us around. It’s good for all of us.
Camp offers my son a break from his stepdad and me. Unfortunately our family is very small, and my son does not
have any living grandparents or any aunts or uncles. I’m sure he is ready for a break from us by the time camp
comes. I know that the values we are teaching at home are reinforced at camp. His time at camp even shows what you
are teaching them at home all this time isn’t falling on deaf ears. They do remember, they do actually listen! HA!  I
remember picking my son up from Jewell and to be honest his socks looked like they were about to walk on their own
and his clothing didn’t match whatsoever. But in the end, did that matter? No, not at all. He had a blast! I threw the
socks out at home and we worked on matching his clothing better the following year. Life moved on and all that mattered was that he had the best time at camp. Those are days that he will remember, and that is what truly matters.

We are a family that received a scholarship in order for my son to return to camp in 2015. A year ago I was hit by a
person who was texting while driving. I was out of work for six months due to my injuries and life became more of a
struggle than our small family wished to admit. My husband and I have never been in a situation like this and within
those six months we went through all of our savings, and then some. You never anticipate situations like this until
they happen to you, even when you feel that you are prepared for the curveballs in life. Though I am still struggling
with the effects of the accident, I have gotten back to work slowly. But, because of being out of work so long and
being in the financial situation we were in, I applied for financial aid. We were blessed to have received it.
It is very hard to ask for help in any situation, especially financially. We are very proud people. We come from a small
town. We have a very good school system. My son has never gone without. It was just a very unfortunate situation
that caused us to need to reach out. But I have found that there is nothing wrong with asking for help if I need
it. There are people in this world who give, solely for your child and the betterment of your child. You most likely will
never know who they are, where they are from or what the reasoning is behind their donations. But without a doubt,
there isn’t a day that goes by that I do not think of those individuals and hope they honestly know how much of a
difference they make in a child’s summer and life—my child’s summer and life. 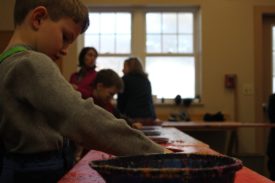 Come join us this May 22-25  for our Annual Memorial Day Family Camp. Kick off the summer in style with the whole family and friends. Just $1,200 for a family of up to 12 people- all meals included! Whether you are coming to camp this summer or not there’s no better way to start the[...]
View Calendar