Many of our long-time campers and staff had their first Camp Jewell experience during the “off season”–teambuilding, recreation and outdoor education programs we offer September through early June. Here’s one of these stories, from Shaina Provey, Utopian coordinator.

As the counselors of the Utopian Village were raiding the costume closet to find the perfect ridiculous gowns for their opening campfire skit, I saw this. A wooden plaque hanging with Ridgefield Girl Scouts printed on fabric and attached by braided leather. I grew up in Ridgefield, which is about an hour and fifteen minutes from Camp Jewell. I was also in Girl Scouts from first to fifth grade. At some point during those years, my troop (Troop 833) came to Camp Jewell. I remember the giant green slide, climbing up to the top bunk in one of the cabins and thinking how cool the dining hall was. I had a disposable camera with me on that trip to camp and I remember having a picture of some of the camp staff–they were all sitting at a table in the dining hall making funny faces. I had the picture hanging in my room, not only because my room was covered with pictures, but because the staff at Camp Jewell during that one weekend made such an impact on me. I remember looking up to them as role models and wishing I could be just like them.

Fast forward to when I was 14. My sister’s best friend went to Jewell one summer and when she got back it was all she could talk about. She easily convinced me that I should go to camp and that summer I was as an L.I.T camper. It was the most positive experience of my life. I made such wonderful friends and had the most amazing counselors. I was able to come out of my shell and prove that I could be a leader. I then came back as a C.I.T the following year. My third summer at Camp Jewell I was supposed to be a Ranger but got a call in the middle of second session from camp asking if I would like to come early and also if I would be interested in being a counselor. Of course I was! I was finally able to be that staff member that I looked up to as a child. That was my first summer as a Utopian counselor, I had no idea that I would in some way be a part of the Utopian village for four more summers after that one.

But that’s a whole other story… 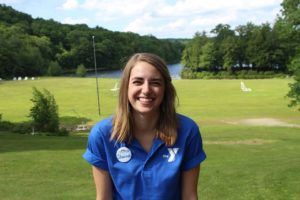